News from our guests

Until September 13, 2021, art jeweler Kaori Juzu is exceptionally invited to showcase her work at the Mori Art Museum Shop as part of a collaborative project for the international exhibition ”Another Energy : Power to continue challenging – 16 women artists from around the world” currently taking place at Mori Art Museum in Tokyo.

The selection of this artist by one of the most iconic museums for contemporary art and design in Japan will be no surprise for art jewellery collectors and lovers, for the singularity of her work on enamel has for many years now highly contributed to the visibility and recognition of this discipline in the art jewellery field worldwide. Enamel has indeed long been suffering from its reputation as an old-fashioned and dusty craft and Kaori Juzu is one of the very few artists who have dared challenging the limits of this technique.
A Japanese artist living in Bornholm, one of the Danish pearls of the Baltic Sea, Kaori Juzu remains a proud ambassador of her native country, as pointed out by journalist Liza Foreman in a recent article published in the Financial Times highlighting the work of some of Japan’s leading female jewellers who fly the flag of their country’s art and craftsmanship abroad. More specifically, Kaori Juzu stands out among her colleagues by the way she manages to make the most of her dual culture: she has achieved a perfect balance between the humility and refinement of Japanese craftsmanship and the minimalist aesthetic of the design of her adopted country. 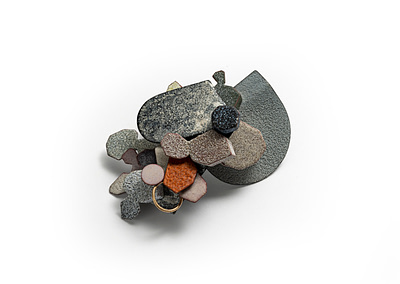 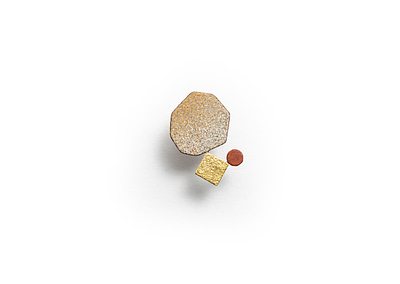 An eternal islander, Kaori Juzu is an artist on the fringe who is forging her own path. In her hands the enamelled piece is no longer a two-dimensional surface, strictly divided by metal strips. Instead, the artist abolishes all boundaries to let the abstract forms, be they geometric or organic, unfold in space and play with the variations of light. She then applies enamel powder to their surface, interrupting the fusion just in time to preserve the brilliance and texture of the grains, according to a process she has developed herself. To the both respectful and bold appropriation of this ancestral technique, Kaori Juzu adds the consummate skill of a colourist, playing with contrasts and the refinement of a colour palette borrowed from the delicate shades of Nature during Spring and Autumn.
The enamelled treasures of Kaori Juzu are micro-revelations whose attraction never fades away. These are works of an intense simplicity that seem to draw us far from the echoes and clatter of the world.
The selection of her artworks by the Mori Museum adds to a long list of awards and successes gained along the years. Recently, Kaori Juzu was selected as one of the top 4 in the category of crafts and design by the Danish Arts Foundation and was awarded an important work grant. One of her latest works, the installation “108 POINTS OF VIEW” is currently shown at the BIENNALE FOR CRAFT AND DESIGN at Koldinghus in Denmark.
For her showcase at the Mori Art Museum shop, Kaori Juzu presents a new series of earrings especially designed for the museum and paying an hommage to its name: MORI=森=WOODS. Visitors will also have the opportunity to see larger works, like one-of-a kind brooches, along with some of the new pieces from her series “108 POINTS OF VIEW”. This corpus refers to a significant number of the Buddhism. All over Japan at midnight on New Year’s eve, Buddhist temples ring their bells a total of 108 times to free the human beings from their Kleshas / 108 defilements. Kaori Juzu drew her inspiration from this ritual to create 108 unique miniature wearable artworks (which can be worn as earrings or pins) by conforming to a self-imposed rule. During the lockdown caused by the Corona crisis, she indeed re-used some remaining and left apart materials from previous works, as a way to materialize a purifying process, an artistic path to resilience.

← A new award for artists Jana Machatova and Peter Machata

Born in Fukuoka, Japan, Kaori Juzu completed her apprenticeship with goldsmith Per Suntum in 2008 and then started her individual artistic practice. Her jewellery is forced beyond familiar boundaries with a sophisticated mix of techniques, an experimental continuation of enamelwork. The result is a new and seductive expression within a beautiful harmony in the shape of jewellery. Juzu’s work has been featured in both private and public collections that include Designmuseum Denmark, Koldinghus Museum, The Danish Arts Foundation and The Cominelli Foundation.